Trelease Woods is a 24-ha fragment of old-growth forest 3 miles north-east of the University of Illinois campus. Historically, it was part of the ‘Big Grove’, an ~2,500 ha patch of eastern deciduous forest that existed east and north of Urbana prior to European settlement. Although Trelease Woods was never extensively logged, it probably had some substantial disturbance from the mid to late 1800s (e.g., cutting of walnut trees for gunstocks and some cattle grazing) until its purchase by the University in 1917. Prior to the conversion of surrounding prairies to agriculture starting in the 1830s Trelease would also have been subject to occasional savannah fires. Currently, Trelease one of only two substantial remaining fragments of the Big Grove (the other fragment, Brownfields Woods is 1 mile NW of Trelease and is also owned by the University of Illinois).

Trelease Woods is flat (~2 m elevational variation), poorly drained (with extensive areas of standing water frequent during the early spring), and with deep, fertile mollisol soils. Maps of soil nitrogen and base cations for Trelease were created in 2019 following the ForestGEO soils protocol. The woods are bounded by a road on the west side, and a prairie buffer strip 20-100 m wide along most of the remaining edges. Extensive historical accounts from the 1920s – 1940s exist describing the composition of Trelease Woods including some stand maps with tree diameter information. During this period Trelease was dominated by sugar maple (Acer saccharum) and elm trees (Ulmus rubra and U. americana). Dutch elm disease arrived in 1955-6 killing 1,200 canopy elm trees, which were largely replaced by sugar maple. The largest trees in Trelease are oaks (Quercus rubra, Q. muehlenbergii, and Q. macrocarpa). Tree ring analysis indicates that the largest bur oaks (Q. macrocarpa) are >500 years old. Trelease woods is currently undergoing another significant compositional shift. From 2019-2021 the vast majority of ash trees (Fraxinus americana, F. pennsylvanica, F. quadrangulata; >600 canopy trees) succumbed to infestation from the emerald ash borer (Agrilus planipennis). In 2022 many of these dead trees remain standing.

NOTE: The below tree and species counts are preliminary while the census data is being finalized. 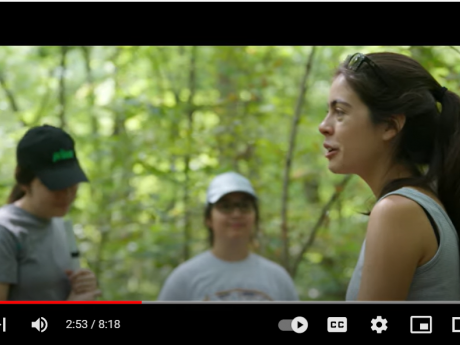 Trelease Woods: The College of LAS’s role in mapping a centuries-old forest